FREEZE YOURSELF at Pacific Science Center

March 15, 2014 – Seattle, WA . The Big Freeze Worldwide is pleased to announce that a new Visitor Engagement offering has landed from outer space and has found its way to the Boeing IMAX Theater Corridor inside Pacific Science Center. No, it’s not an alien ship. It's called PACSCI360° and it's the most advanced user-activated “Frozen Moment" camera array technology available to the public anywhere in the world.

The Big Freeze Worldwide is the innovator of this breakthrough Movie Booth attraction, and we are the leaders in this Entertainment/Pop Culture technology. We are the studio that produces the E! GlamCam for Grammys, Emmys, Golden Globes, and Fashion Week NYC. We've deployed similar arrays for NBA All Star Weekend, Nickelodeon’s Kids Choice Awards, and more. The visual effect of Frozen Moment always inspires awe!

PACSCI360° excites, educates, and entertains visitors of all ages. It sparks the imagination and engages visitors physically by inviting them to express their inner self or act-out their wild side. (See demo here http://bigfreeze.com/links/PacSciDVD/) Once a visitor's Frozen Moment is captured, they can quickly view and select their movie loop and within minutes, share their movie link via Email, Facebook, Twitter, and Instagram.

Visitors also receive a sharable HTML email that plays their interactive movie when clicked. The total experience and takeaways are terrific for visitors of all ages – from the interactive, community engagement fun, to each unique movie loop that lives on forever. 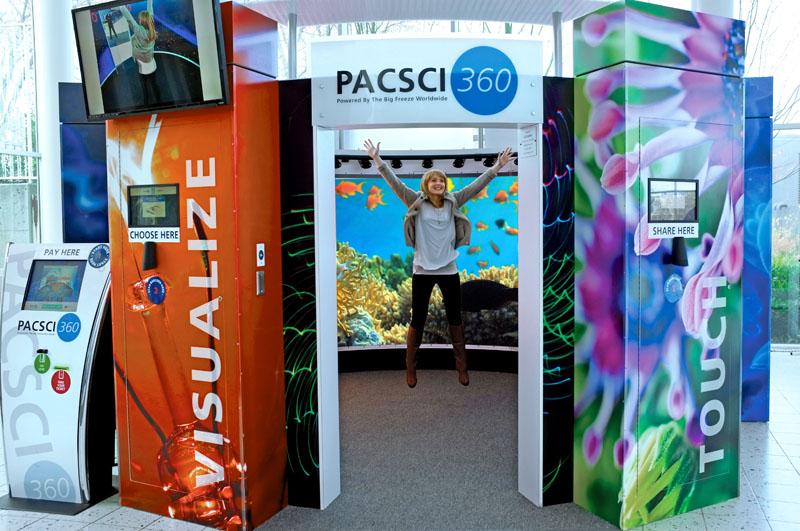 Robert Latorre, innovator of this system comments, “We are happy to bring this level of camera array, software development, science, and totally fun entertainment technology to Pacific Science Center, something great for this hi-tech city of innovation.” Something so Unique: Visitors cannot get this Movie Booth experience anywhere else in Seattle. It’s a one-of-kind opportunity to create a movie loop in 360°. Visitors can select a 360° background image from an easy-to-use library of HD images such as outer space, underwater, or in a forest. With a 10-second countdown clock display, the visitor anticipates their moment to react. At zero – it’s Action! Although the capture only takes a moment, the finished movie loop can be played forwards, backwards, or in slow motion infinitely.

Visitors are encouraged to experience PACSCI360° and get the coolest movie loops of themselves in 360° Frozen Moments. The cost is only $6.00 per loop capture, paid separately from admission to Pacific Science Center. Pacific Science Center is located at 200 2nd Avenue North, Seattle, WA 98109. Telephone: 206.443.2001